Secret premiered last week and has four episodes out right now (I’ve only seen three). Defined as a melodrama, it presents the setup where the hero Min Hyuk loses the woman he loves, Ji Hee, in a car accident for which our second lead Do Hoon, a newly appointed prosecutor is responsible. However, taking the fall for the crime is Yoo Jung – the second lead’s long time girlfriend. Enraged, Min Hyuk vows to have revenge for the crime and punish Yoo Jung for it all her life. Thrown into the mix is Se Yun, Min Hyuk’s new fiancé, chosen by his father.

As it is, Min Hyuk is a spoiled and selfish rich daddy’s son who has it all but is uninterested in the family business or affairs. He spends his time playing around, the kind of person who thinks he has it rough instead of realizing others may be worse off than he is. He’s the type to wallow in self-created misery (hating his origins/family background) but living the standard nonetheless. It’s not like he’s made any effort to make something of himself. He’s either too cowardly to wade out on his own, or too dependent on the golden spoon to try for something else.

Even Se Yun points that out to him when he approaches her to break their engagement. She refuses to comply, telling him to pluck the courage to do so himself if he wishes to terminate it, but rightly pointing out that he never will. As for her, she’s as happy as she could be with the engagement since it’s an arranged match – if not with Min Hyuk, her father would set her up with someone else. Since she and Min Hyuk are already friends, she has no qualms since the scenario for her is ‘better a devil she knows than one she doesn’t.’

His destructive and crazy, almost psychopathic behavior is hinted at through so many actions – the way he attacks the doctor after Ji Hee dies, when he leaves a girl alone in a hotel room after stealing her clothes, when he drinks off his days and sleeps at Ji Hee’s old apartment, clinging to the hope of having her back in his life. His signature phrase is, “This/You’re… no fun at all.”

He gets engaged to Se Yun while still going out with his girlfriend, showering her with expensive jewelry gifts, as if trying to ease his own guilty conscience – which probably doesn’t feel all that guilty. He only ends up coming clean with her when forced to do so by his step mother Madam Hong. As it is, he has no respect for his step mother and always calls her ‘Ahjumma’. She spots him and Ji Hee at the jewelry shop and lets slip, albeit deliberately, that Min Hyuk is engaged, although I find it a not so malicious act. When Ji Hee leaves after just a few harsh sounding words from her, she points out his father would be much worse than her and how can Ji Hee face him if she couldn’t even put up with this much. Min Hyuk knows its true but chooses to ignore her words so she simply advises Min Hyuk to let go of Ji Hee unless he can fight his father for her. 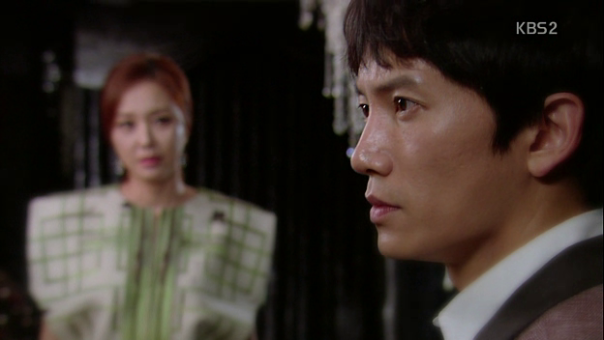 And that’s a poignant scene, because you see he’s the one who draws his hand back from Ji Hee’s as the elevator doors close. In the end, if anyone’s responsible for her leaving him, it’s himself. 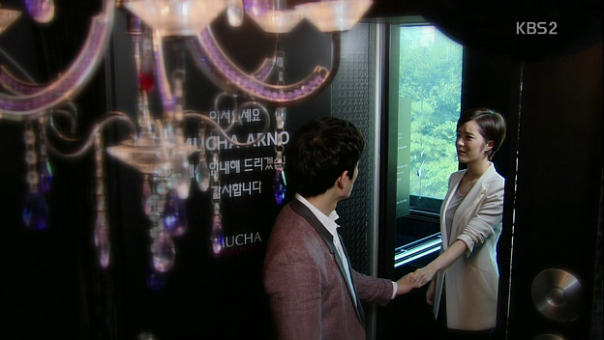 As a result, she vanishes from his life and he tries to find her again and again, but she’s nowhere to be found. No matter that he ends up rebelling by living destructively with no regard for anyone but himself – at the end, he probably can’t face the fact that he let Ji Hee go himself. When he does find her again, she’s being loaded into an ambulance by the side of the road after having been hit by a car. And at the hospital, after she professes her love for him again and breathes her last, he finds out she was expecting his child.

Already quite the extremist in his thoughts and actions, his temper and hatred is sparked when Yoo Jung shows up to claim responsibility for the accident but insists she didn’t know she had hit someone. In a way, her admission is true, but her attitude comes off as somewhat casual for having killed someone.

And the only time you ever see Min Hyuk do something good and selfless are when he sells everything on him – watch to shoes and leaves the money from it anonymously with Ji Hee’s mother, hoping it may be of help to her.

Truth for Yoo Jung is that she’s quite the devoted girlfriend to Do Hoon, having supported him after being together for seven years already. Although his parents disapprove of her, Do Hoon keeps seeing her and finally on their seven year anniversary (also the night of the accident) proposes to her. Ecstatic, she says yes and it’s a grand moment for the two of them. You can clearly see he cares for her and the relationship makes the two happy, but some moments slip through where you begin to wonder. One such moment is when they are driving home that night, just before the accident, when Yoo Jung says ‘I love you’ to Do Hoon twice but he never responds with more than a smile.

When Do Hoon realizes Yoo Jung has taken the blame for the accident, he confronts her and only then does she realize it’s a hit and run for which she’s facing definite time in prison. While he insists she go to the police and come clean about him driving instead of her, she takes the noble idiot route, wanting to take the blame since it would mean the end of his dream and work as a prosecutor.

Seemingly, it’s a hard decision for Do Hoon and he’s torn up about it, begging her to come clean again and again, but he never has the nerve to take the necessary action himself. So while she may have selflessly taken the blame and let his conscience feel guilty for the accident and then letting Yoo Jung take the fall, it doesn’t give him the courage to take the harder leap and bring out the truth himself.

For Yoo Jung, shit hits the fan when she’s arrested in front of her father Woo Chul and even though she’s worried for him, there’s nothing she can do to help him. Do Hoon promises to look after him. When turning to Do Hoon doesn’t help him, Woo Chul goes to beg Ji Hee’s mother to forgive his daughter but she’s also a parent who’s lost her child and refuses to budge. At that moment, you feel for both parents but can’t make a decision which to favor – the woman who will never see her child again or the father who just saw her daughter sent to prison for a hit and run, her future totally ruined. 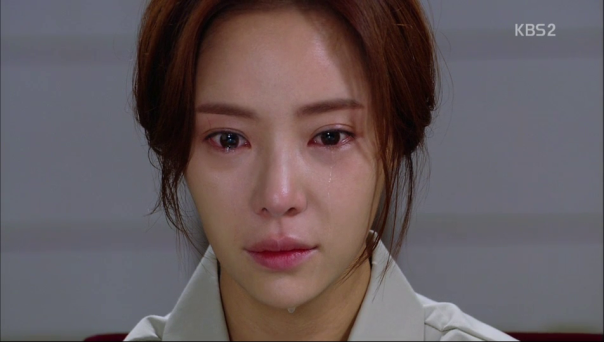 And making sure she gets what’s coming to her is Min Hyuk, intent on destroying her life like she destroyed his. You can feel the anger and the dangerous nature in him when he corners her in the police station, almost choking her to death while quietly muttering, “You dare mess with what’s mine?” 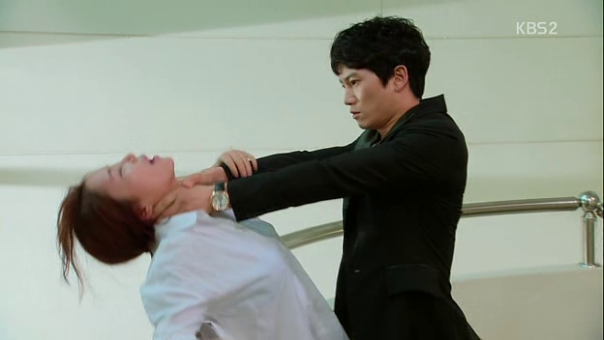 Knowing Do Hoon is Yoo Jung’s boyfriend, he specifically makes it so that Do Hoon is the very prosecutor on her case and in the end responsible for putting her behind bars. There’s cruel, and there’s CRUEL. This is beyond all that. 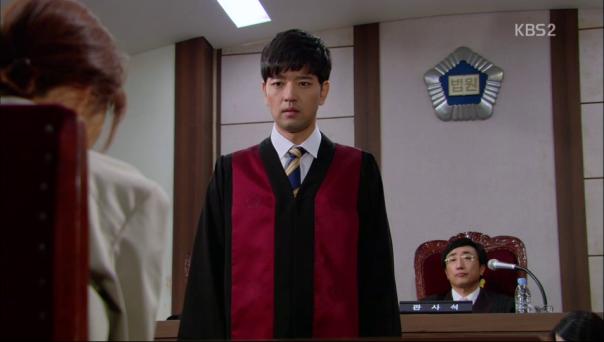 Every time he has that calm exterior on while plotting something vicious, you can’t help but be burned and shudder. He’s a smile on his face while he’s deciding how to ruin the other person’s life. This is one man NO ONE would want as an enemy. He decides to take back control of his life by living up to the image of the chaebol son after he makes sure Yoo Jung is behind bars.

And here’s just one thing I’d like to say: Fine, I get that Yoo Jung loves Do Hoon a lot and would do everything for him, but I’d never stand behind her decision. Does loving someone mean you can put everyone else around you in misery? A person should be accountable for his actions – she loves Do Hoon so she should stay by his side while he atones for his mistake rather than taking the blame onto herself and causing her own world to tumble upside down. How could she not think of her father?! Personally, I believe love is a beautiful emotion and I can imagine one wishing to give their all to their ‘fated one’ – hell, I’d probably do that myself one day but never something like this. Then again, maybe I’d be too blinded by love.

But what Yoo Jung fails to realize is that the implications of her actions go beyond herself. She feels her fiancé doesn’t deserve to go to jail for that mistake but does that mean her father deserve this instead? 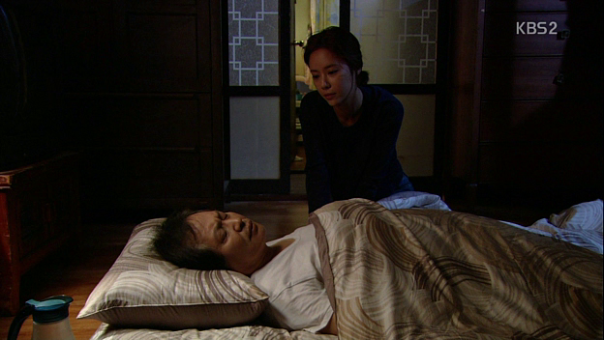