Hey folks! Here are the promised comments for Heartless City along with some speculation for Episode 14! I hope you guys enjoy the comments as much as you like the recaps and love the episodes! 😀 Please forgive me for not replying to all your comments but rest assured, I am reading them and will reply to them, and most of all, I really really really appreciate everyone’s feedback for my recaps and the blog! Thanks a million for loving it all though in truth – YOU guys are the life around here! ^_^

The love story between Park Sa and Soo Min sure has moved fast-but I’m not complaining. For me, it’s believable enough and I’m liking what having feelings for the other person is doing to both characters. For Park Sa, she’s proof that he’s not a monster, and not just Park Sa. Rather, it’s proof that he’s Jung Shi Hyun-the exact name he gives her. The fact that he tells her his real name goes to show that he thinks of himself as Shi Hyun when he’s with her, and not Park Sa. The only other person we’ve seen him be comfortable with as Shi Hyun, even when he grew up n became Park Sa was with Kyung Mi. For Soo Min, he’s the person who saved her life. The girl is trying hard to change from her ‘chill’ attitude to becoming the person Kyung Mi wanted her to become and being with Jin Suk on the undercover mission and coming across Shi Hyun/Park Sa gives her the chance to show just how courageous she can be. Like I said before, she’s not a damsel in distress, even when she IS in distress-example: How well she handled herself n defended herself in the Haneul situation. 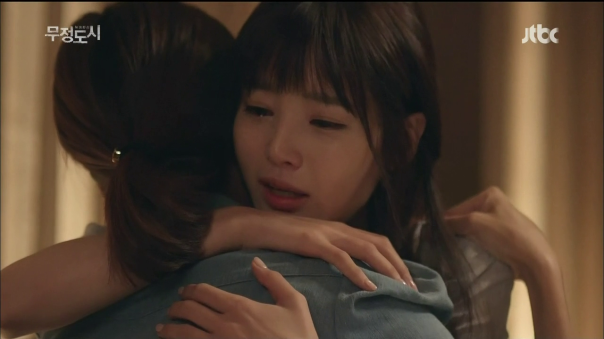 The war finally begins between Busan and Park Sa because Park Sa refuses to let Soo Min die. Whether he did it for himself, for her, out of love, out of conscience, n o one can say exactly. Personally, I think it’s a mixture of all of the above-he is into her and its not an emotion that’s going away anytime soon, and he can’t allow another Kyung Mi like scenario to play out in front of him again because I think that would be the total breaking point for him. Last time, he almost finished everything because Kyung Mi died and he sustained only because he wanted to know and avenge Kyung Mi’s killer. If it happened again, the guilt would be too much for him.

Chairman Jo is a not-to-be-taken-lightly-ever kind of opponent. He gives you the chills with the way he smiles and with the way he reacts when furious. He is so the Dad of Haneul-ten times, no a hundred times creepier than his son. We saw Haneul indulge in all kinds of bad activities so we got a reading on him and feared him as much as we despised him. Daddy Jo didn’t even have to go so far. One scene with Park Sa and him in the same room was enough to put fear in us, and show Park Sa just how helpless he still is. I can’t wait to see how the writer tops this!

Safari-I still like the guy at times, when he shows emotions and his subtle changes in expressions show us that there’s more to the man than the surface shows. Time and again, Safari has emphasized that the reason he betrayed his original path-as a police officer is because of his greed for money but the way he says it and his confrontation with Hong Ki leave little doubt that he’s fighting his own demons and isn’t as cold hearted as he wants everyone to believe.

That being said though, I don’t truly buy his story that Busan was the one who ordered the hit on Kyung Mi. There’s too much of a coincidence in him finding the picture-Park Sa’s relationship with Kyung Mi and telling him how she died. He may not be a total psychopath, but he’s still greedy enough to take that way to achieve what he wants so who knows, this may be another ploy to get to Park Sa. I’m not saying I don’t believe Busan wasn’t behind it-perhaps he was, BUT Safari may very well have his own purpose for revealing anything to Park Sa. I can’t see the old episodes right now, but didn’t Safari know Kyung Mi died when he went to find Chung Mo later on? And his reactions didn’t betray any feeling that it might have been preplanned and at that time, he bought Chung Mo’s story that it must have been Park Sa.

Hong Ki is still an enigma and no one knows what his true motives are or which side he’s supporting. You see his actions and think he’s totally honest about catching Busan-I still think his main concern is bringing the downfall of Busan, but the real question now is what he’s willing to do to achieve that. As we’ve already seen, he lost Safari, or if Safari is to be believed, left him no choice but to walk the wrong way and now he’s ready to throw Park Sa to the wolves as well. His meeting with Jin Suk-telling her to leave Park Sa’s side is warning enough that he means to abandon Park Sa and not help him like he’d originally promised.

The very basis on which he convinced Park Sa to undertake this mission was a false pretense and now that that fact is in the open, Park Sa’s totally like a lost child. That expression that he makes when Hong Ki asks him if it’s too hard and that he can give up-it’s just gut wrenching! He’s seeing eight years of hard work-eight years of living like a dog and being a monster to survive crumble in front of him as if they had no significance! 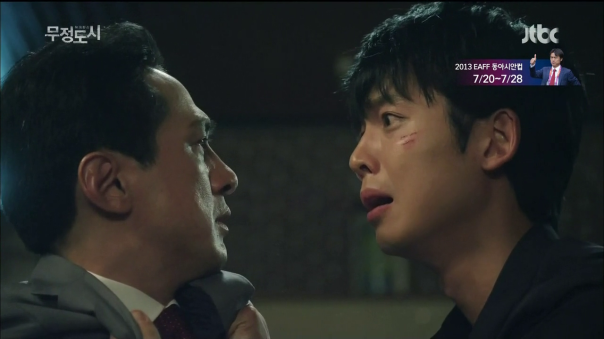 I liked the reversal where he turns back to Hong Ki and tells him never to call him Shi Hyun again, saying he’s now Park Sa. It would be so gratifying to watch Park Sa turn bad just to take vengeance on Hong Ki for using him like this but I’m sure that’s a turn this drama would never take. Haven’t seen the preview, but the drama already veered toward safe territory by making Park Sa an undercover guy in the first place, plus Park Sa is totally exhausted from this life. You can see his control over things faltering-the situation with Soo Min and already dead Kyung Mi’s guilt are getting to him more than he would like to admit.

At this point, I won’t put it past Hong Ki to be the true culprit behind Kyung Mi’s murder. After all, this drama always does that which we never expect and this would be one such twist to throw us in a good loop-both Hyung Min and Park Sa turning on Hong Ki because of that and then who knows, Hyung Min would finally let go of his ‘I’ll kill Park Sa’. At least that would give us hope of Park Sa surviving in the end! And thinking back, only Hong Ki was the person who knew the relationship between Park Sa and Kyung Mi-not even Jin Suk knew it. 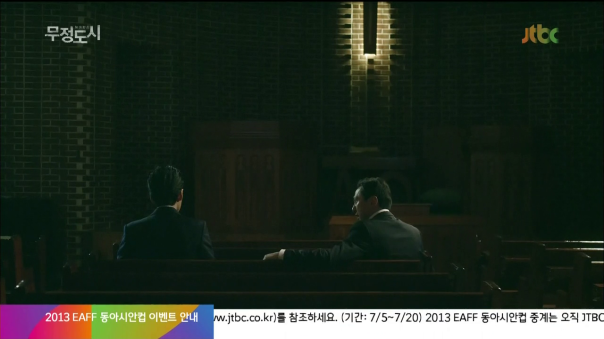