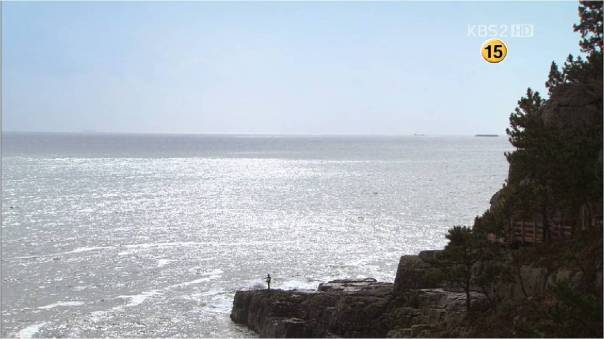 (My Korean isn’t perfect so I might have made a few mistakes. Please overlook and forgive, if any

!  I also did not understand the episode 100% so there’s many things I am hazy about. Still, I hope to give you an idea about what is happening. Also, putting the screen caps in the middle of the post takes me a long time so I’m simply attaching it at the end as a gallery. Sorry for the delay in recapping! All in all, I hope you enjoy the recap!)

Realization and dread sinks in as Sun Woo watches his father hanging from a tree, lifeless. He hangs onto his father, calling him and trying to bring him to life. When Jang Il points out his father seems to be dead, Sun Woo shouts back at him, “He’s not dead. My father’s not dead. He’s alive.” Finally, the branch breaks and his body falls down while Sun Woo desperately tries to get him to wake up and tries to carry his father before finally collapsing and crying, slowly accepting the reality.

Jang Il’s father sits at a type writer and writes a suicide note. Then he drives up the body to the woods and hangs it onto the tree, all the while a nervous wreck. He tries to simply go away before hanging it when the Chairman’s words ring in his ears and he turns back to see Sun Woo’s father still alive and reaching out to him for help. With resolve, he heads back to Sun Woo’s father and finishes the job. That night, Jang Il goes to his father’s place to find him and sees the letter but his father stops him before he can read it and sends him home.

Sun Woo is recording his statement at the police station with Jang Il and despite the policeman’s insistence, stays admanat that his father could never kill himself and the policeman shows him the suicide note but he can’t believe it. Jang Il asks the policeman to still try and investigate a bit. Outside, Sun Woo insists his father could not do that and vows never to forget the person who did this to father. Jang Il’s father prepares a feast for dinner and learns the dead man is Sun Woo’s father. Jang Il’s father tells him not to socialize with Sun Woo and tells him the Chairman has promised to send Jang Il to university. Jang Il cant believe it but can’t help being happy about it either.

At home, Sun Woo lies in the dark. He hears his dad’s voice and runs out. He imagines his father telling him not to be like this and asks his father why he did that but there’s no response. The next day, Jang Il and the others head to a show but Jang Il isn’t much interested in the show until a girl, Ji Won comes on stage and sings. Again, he’s taken. It’s the same girl Sun Woo met in the parking lot. She introduces herself after her performance and thanks her family and the people who’ve helped them.

Next day, Jang ll heads with his father to meet the Chairman and his wife who like him. While they’re having their meeting, Ji Won and her mother sit outside but they’re unable to see the Chairman’s wife and the secretary refuses to take their offering. Jang Il sees Ji Won on his way out. Sun Woo runs around the docks trying to find out more about his father. On her way back in the car, Ji Won catches sight of him standing in the street.

Sumi goes to the pharmacy to buy medicine where she runs into Jang Il. She ignores him and he tells her he’s sorry for not keeping the promise that day. She tells him its okay if he comes another day but he tells her he can’t keep his promise. She tells him to say it properly then-he knows who her father is and that’s why he ran away. He has nothing to say and walks away. Sun Woo tries to point out the anomalies in his father’s suicide but the police detectives aren’t much help. Dejected, he makes his way home.

Jang Il asks him how much longer he’s going to be like this but he doesn’t reply. Jang Il leaves, promising to come back tomorrow and tells him he’s going to college in Seoul and leaves when Sumi’s father comes in. Sumi’s father again tells Sun Woo to stay away from Jang Il. He offers to help Sun Woo in finding out who the criminal is but Sun Woo rejects at first, knowing the shaman is doing it for the money but he persists. Onto the ceremony as ominous clouds appear and loom above. Sumi’s father starts spasming and suddenly starts crying out “I can’t go, I can’t go, I can’t go” and then grabs onto Sun Woo, clutching his throat, saying, someone strangled him and then someone hung him up. Sun Woo thinks its bull but the shaman then says, “That person came here. That person is here. That person came here. That person came here,” and Jang Il’s father, standing among the crowd starts shivering. Sun Woo asks him to name the man just as Jang Il’s father walks away and Jang Il watches him walking away. The shaman doesn’t reply but tells Sun Woo, “I’m sorry I couldn’t come that day as I promised,” before he faints. Sun Woo is left speechless.

We get the truth in a flashback. That day, the shaman had passed out in the woods until night fall. When he woke up and was about to leave, he saw Jang Il’s father carrying the body. He’d been left watching, horrified as the man hung Sun Woo’s father. He didn’t recognize the man but recognized a wound on his arm. Sun Woo asks the shaman what he knows but he says he already said everything. Sun Woo tells him he’s afraid, it seems his life will be changing a lot here on. He throws his father’s ashes into the ocean and cries, “Father! Help me! What am I supposed to do?” At home, he re reads the suicide note and this time, finds something. Going through his father’s papers, he takes out one and compares the two. The word “Seupnida” is spelled differently in both. The same person would have wrote them similarly. Hence his father probably didn’t write that not. That night, Sun Woo sits at a type writer and types away a single word before heading over to Jang Il’s and tells him about the suicide note. His father is also there. He tells them he’s going to go to the police station in the morning.

Jang Il reports to Chairman about this but he isn’t very bothered and dismisses Jang Il’s father. Jang Il’s father heads to Sun Woo’s house and searches for the letter, finally finding it and runs into Sun Woo on his way out. Jang Il is surprised to hear his father had gone to Sun Woo’s, saying it was because Jang Il was worried that he came to check up on him. Jang Il’s father burns the letter. Meanwhile, Chairman No Shik tasks secretary with finding out more about a specific person.

Meanwhile in a foreign country, a man receives a letter from Sun Woo’s father. Sun Woo’s father has written about the child who is still alive and asks the man, “Whose son is it? Is it Chairman Jin No Shik’s son, or is it Tae Ju hyung’s son?” At home, Sun Woo finds the letter missing. Sumi walks home and sees a large banner about Jang Il’s admittance to college in Seoul. In the paper, Jang Il finds Ji won’s name as an attendee and brightens up. At the same time, Ji Won is having lunch with her father. Her father tells her this might be the last time they can come to such a wonderful place and says sorry. Ji Won tells him not to worry, she will return all this to him and its not his fault, he simply met the wrong partner. She tells him to remember the taste of the wine, she will find it all back for him. Sun Woo meanwhile finds an old picture in his father’s belongings, a picture of him with the Chairman and the man he sent the letter and wonders where he’s seen one of the persons before.

Meanwhile, at Jang Il’s celebratory party, the shaman recognizes the mark on Jang Il’s fathers arm and realizes the truth but turns away and then asks his friend more about him and finds out he works for Chairman Jin No Shik. Now, he finally places the face alongside the killer he’d seen that night. He is more concerned when he sees Sun Woo still hanging around Jang Il. Jang Il promises Sun Woo that once he becomes a prosecutor, he will definitely find out what happened to his father and help him out.

Sumi’s father reminds Sun Woo to stay away from Jang Il that night again. Sumi’s father asks him if his father and Jang Il’s father were close and Sun Woo tells him they never even met. He stops Sun Woo like he’s about to tell him more, but then dismisses him.

Jang Il is in a great mood today and exclaims it’s the best day of his life. He promises again to help Sun Woo once he has power. On his way home that night, Sun Woo is kidnapped by the gangsters who branded Jang Il’s fathers arm and whom he beat up. Seems they want him to harm Jang Il’s father. Sun Woo is shown leaving the area with the knife.

The preview for Episode 3 made me cry! It’s about to get a whole lot more sadder and heartbreaking! 😥 See you with Episode 3!